Posted at 17:54h in Blog by Daniel Whelan 0 Comments

I’ve been on holiday, and so I didn’t get time to update you on a great event I attended at the beginning of the month: the first Haringey Children’s Book Award, which took place at Heartlands High School. I wasn’t nominated, but I was asked by Haringey Libraries’ Principal Librarian Children & Youth, Sean Edwards, to give a speech on the importance of reading. I brought in a book that inspired me when I was younger – the Usborne book of Greek Myths and Legends, and told the story of how I used to scare my sister with the brilliant centre page spread of Medusa by Rodney Matthews. 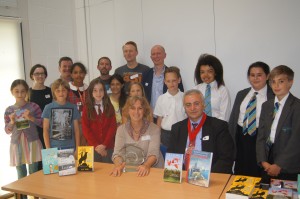 Winner Gill Lewis, centre, with the Deputy Mayor to her left. I’m at the back, between Piers Torday and Steve from Pickled Pepper Books

Both Piers Torday and Gill Lewis were in attendance, and both spoke about their books and answered questions.

One of the great things about the award is that the winner is decided on the day, by pupils from all the schools involved. So votes were cast shortly before the event started, and then were off being counted while myself, Sean, and the Deputy Mayor of Haringey spoke.

The winner was Gill Lewis for Scarlet Ibis. I’ve since had time to read it, and I can absolutely see why it won. It’s a great book about a girl, Scarlet, who has to look after her family because of her mother’s mental illness. Her brother is autistic, and is obsessed with birds, the only thing that calm him. When an accident at her flat means Scarlet is separated from her brother and placed in care, she has to find her way back to them. It’s a sensitive book: gentle, but unafraid to look at difficult issues without ever getting preachy.

I’ve also picked up a copy of The Last Wild from Pickled Pepper Books – who were selling books at the event – and I’m looking forward to getting stuck into that. I’ll let you know how I get on.