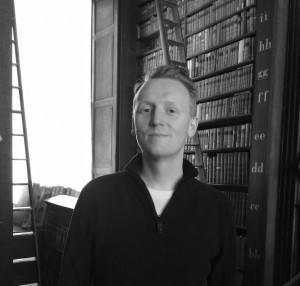 Daniel was born in Cheshire, but grew up on the North Wales coast. He eventually left Wales for London to study a degree in Acting, which has turned out to be exactly as useful as you’d expect it to be. (His spectacularly unsuccessful acting career included being fired from a production of As You Like It, and a phone call from the Harry Potter production office about playing Ron Weasley’s brother that never turned into an audition.)

He has written two plays: an adaptation of one of his favourite books, Richard Adams’s Watership Down, which Mr. Adams called one of the best he’d read; and A Harlot’s Progress, based on the etchings by William Hogarth. Sadly, Mr. Hogarth was too dead to give his opinion, but Time Out London gave it an alright review.

In 2013, Daniel’s first novel, The Box of Demons, won the Write Now Prize for new children’s fiction. He is much happier being a novelist than he was as an actor or playwright, and is currently working on his second book.